BARRIERS TO ENERGY EFFICIENCY IMPROVEMENT: REVIEW OF A PAPER AND ITS RELATION WITH THE ENERGY WATER PROJECT

15 May BARRIERS TO ENERGY EFFICIENCY IMPROVEMENT: REVIEW OF A PAPER AND ITS RELATION WITH THE ENERGY WATER PROJECT 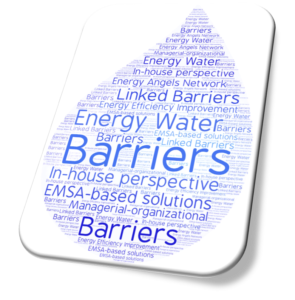 At the beginning of the present year, a study has arisen in relation to the causes driving the existence of barriers to achieve improvements in energy efficiency for the industry. The study uses the Indonesian steel industry as a case study and goes deep into the inter-dependence patterns of the different barriers studied. The conclusions drawn by the authors are noteworthy, as focus on barriers to be tackled from an in-house perspective. The paper identifies problems where specific tools, such as the EMSA web tool and the associated Energy Angels network created within the framework of the Energy Water project, could potentially play a role.

A review of the paper

The paper firstly highlights the importance of energy efficiency improvement, as it may report economic benefits by means of energy use reduction; as well as reduced environmental impact. The study defines barriers as limiting factors which decrease the potential for the implementation of cost-effective energy conservation measures, remarks the idea of Walsh & Thornley (2012) that barriers are usually linked among them (in such a way that understanding how they are related may help to overcome difficulties), and makes the observation that studies on energy efficiency have traditionally focused on technological issues, managerial and organizational aspects not having received sufficient attention.

In this scenario, the document lists eight managerial-organizational barriers, and assess their importance in energy efficiency improvement and their relationships.

The results obtained indicate that there are 5 key variables with high driving power and strong dependence power, for which actions performed have effect on the others and also feedback on themselves. These variables are: (a) lack of power of people in charge, (b) higher priorities to the production activity, (c) resistance of management to change, (d) inadequate management capacity and (e) conflicts of interest within an organization’s subsection. On their part, 2 additional variables (lack of management awareness and complex decision chain) have low dependence but strong driving power, in such a way that may be considered also essential and the root cause of barriers. Finally, the last of the barriers (insufficient integration of energy objectives) may be considered as a dependent obstacle, as the proper management of this issue is dependent on the overcoming of other barriers.

Interestingly, none of the barriers analysed was identified as autonomous, indicating that all of them influence the successful implementation of energy efficiency measures.

What kind of support could the Energy Water project provide in similar situations?

The Energy Angels network has been conceived as a vital issue with helps companies registered at the EMSA to avoid barriers in their processes of implementation of energy efficiency projects. Together, these two tools give coverage to technology-related measures to boost energy efficiency (through the functionalities of the EMSA), but also pay attention to the managerial-organizational aspects, identified by the reviewed paper as little addressed (by means of the network of Energy Angels, which give support to industries through their list of services). Even though the support to all the studied variables is not possible (as some of them are out of the tool’s scope, for instance in relation to the lack of power of people in charge in the company), the fact that none of the barriers is autonomous suggests that improvements in individual barriers would have an effect on the global success of the barrier tackling process.